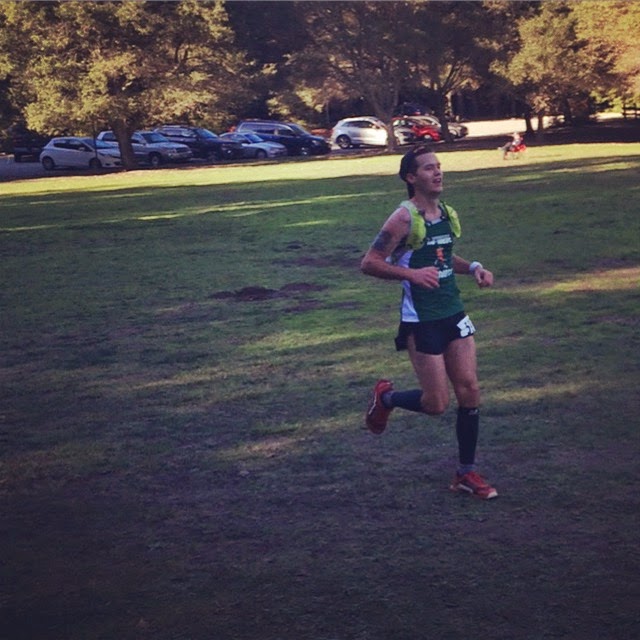 December proved to be a pretty monumental month in the life of Josh. Among other small victories, I was admitted into (online) graduate school at the University of Missouri, I began my first teaching position at a local high school, and I ran my first ultra. I'll be focusing on the latter though you may read more about the others at some point as well.

I've had my eyes on the Woodside 50k on December 28th for few months, but I didn't commit to it until early December. In other words, I didn't pull the trigger and pay for it until then. This race was attractive to me for a few reasons: the timing was right, it's the cheapest race of this distance I've seen, and I was already planning to be up in the Bay Area around this time. I'd like to say I researched the race director and previous events on this course and liked what I saw, but that's not true at all. The decision was all logistical.

The lead up to this event was all too uneventful; I spent December 27th driving to San Jose from Salem, Oregon. This drive wears me out mentally each time I make it, but it's a necessary evil to endure in order to spend the holiday season with friends and family in beautiful Salem. Emily and I got up early Sunday morning and headed off to the course in Woodside. We had never been there before and, until the night before, had never even seen photos of how beautiful it is.

Checking in was painless, and I know that there were runners who registered the day of and had no issues. Up until this point I hadn't felt any sort of nerves. The only expectation that I put on myself was to finish; I didn't have any other goals that I was married to. Once I stepped out to the start line with 100 or so others I began to look around at all of the others who really looked like they knew what they were doing. This is when the nerves set in. I felt out of place. I was a track guy who dabbled in road racing for a bit and now I'm running thirty miles with a bunch of people who looked way more prepared than I felt.

As soon as the race started I was in my element again. I knew how to do this part. Even though I didn't know how fast I should go at this point, I was running. I'm not used to letting the lead pack go, but I forced myself to do just that. The sooner they were gone, the better. I ended up settling in with a group of guys of all different shapes and sizes with gear varying from all of the technical stuff you see in Runner's World to a guy who ran in cargo shorts because he forgot to bring his running gear and he decided to sign up for the race that day. It was great.

Two of us from this group ended up gapping the rest a little bit; it was me and the guy in cargo shorts. We ran together for about forty-five minutes, and it was great. He was the nicest guy, and really kept me going. The first 10k or so was the hardest portion of the course. It was pretty hilly, and it was certainly more than I had planned on after glancing at the elevation profile of the race a month or so prior. He ended up taking off, but not before leaving positive vibes behind with me. I ran into him at the next two aid stations, which was very encouraging. Not only seeing a familiar face, but his verbal affirmations were timely.

I didn't see him again after the second aid station at nineteen kilometers in. I was still feeling pretty good at this point. My legs were fresh coming into the race, and that was paying off at this point in time. A few miles after this aid station, however, things started to change. I started feeling pain in my right hip flexor on the steep elevation changes. Within thirty minutes I was feeling it in both hips, and it wasn't just the steep elevation changes that made them hurt.

This part sucked. I was hurting, I was running alone, and I was only half way done. I spent close to an hour alone before I came across another guy who was having a hard time. In contrast to Cargo Shorts Andrew, this guy wasn't necessarily affirming in his words, but I was still encouraged to be with somebody else and he pulled me out of my slump. He works for some big tech company in the Bay, and runs these races with some sort of regularity. In fact, he had run this same course just a few prior in a race put on by another running group.

Together we made it to the aid station thirty-three kilometers in. He had no interest in taking his time to eat Oreos and peanut butter filled pretzels like I did, so he took off and we wouldn't reunite until I saw him at the finish line as I was coming in.

The hardest part was over. “It's all downhill from here” I kept telling myself. This was true in that the hardest part was behind me, and that it was actually mostly downhill for the rest of the run. I still had to stop myself a number of times to walk. My hips were killing me, and my feet were beginning to get beat up. I ran by myself for this five and half mile stretch until the next aid station.

I had made it to the last aid station. Again, I took my time and ate plenty of fruit and pretzels. This station didn't have Oreos. Though the No Meat Athlete podcast I was listening is great, I was lonely and happy to see people again at this point in the race. I remember a girl at the aid station asking what I needed. I didn't know what I needed, but I grabbed a handful of sliced oranges and started eating. She asked if I needed ibuprofen. I declined. Three other runners came in during my stay at the aid station, and they had similar conversations, all involving the aid station worker trying to push ibuprofen on them. I thought this was the funniest thing at the time. It's not so funny as I look back, but I'm happy to have had the laugh at the time.

Then my day changed. The same ibuprofen girl informed us that it was less than five miles to the finish. Only five miles away? My legs suddenly felt lighter and I was ready to finish up. I was still under five hours in at this point, and I had told myself that I'd be happy to finish in under six hours. I know I said earlier that I didn't have goals that I was married to, and that's true. Mostly. Once I knew I could finish sub six, I made sure it happened. The last segment was a fun one. I put some music on that I could sing along with, and I felt like I was flying as I sang along with Rivers Cuomo of Weezer.

During this segment I kept leapfrogging with another runner who made me second guess my pace. Was I fluctuating that bad? I felt pretty steady all the way, but we decisively passed each other three or four times. I wasn't concerned with who reached the finish line first, but I wanted to be consistent with my running. I was fairly confident that it wasn't me who whose pace was fluctuating, so I didn't make any adjustments, and I ended up pulling away from him. We ended up making a pretty sharp turn with what I'm guessing was ¾ from the finish line, and I saw the leapfrog guy again coming in pretty quick. It was at this point when I made my mind up that I didn't want him to reach the finish line before me.

More than once I thought I was right around the corner from the finish line. I thought I heard people, I thought I saw the park. I kept being wrong, so when I finally was in the park I couldn't help but smile. I was very happy with how I finished. I felt fast and smooth coming into the finish chute. Emily was there making sure she snapped a few photos of the finish, because I give her a hard time about missing the opportunity in other races.

Then it was over.

I shook a lot of hands. Gave a few hugs. Then I realized how bad my foot hurt. I didn't feel this pain during the race, but not five minutes after my finish I felt sharp pains in my arch. Five days later, I still have these pains, but it's feeling a little better with each day.

At the finish line I was treated with warm soup and beer. I couldn't think of anything I wanted more.

I don't have anything to compare this race to, but I had a great time. The course was well marked, the aid stations were great, the volunteers were wonderful, and the trails were gorgeous. The only bummer of the day was that they lost my time, and when I asked about it they told me it was because I finished at the same time as a bunch of other people so the system must have missed it. This was a bummer because I clearly finished with nobody around, and I heard him give the same excuse to a few other runners. He asked how long it took me, and took my word for it. Now my “official” time is a guesstimate of what I ran because I didn't turn my watch off right away. Not the end of the world, but it was annoying. Maybe this is normal in trail races; I'm just used to times on the track being super precise.

My biggest takeaway from the whole experience is that I totally misjudged what my strengths would be in this race. I figured that my legs were pretty strong because the trails I regularly run have about as much elevation gain in five miles as this course did over thirty. I was worried about how my cardio engine would handle the extended distance; I hadn't done a training run longer than eighteen miles leading up to this race. I had this backwards, my legs were killing me, yet I wasn't having to breathe super hard throughout the race.


Great experience. Happy to get this in before the end of 2014. Now I'm looking to finish a 50 miler before my 25th birthday in August. Stay tuned.