007 My Journey as a Runner/Veg(etari)an

[Hi friends, this is my longest post yet. If you don't want to read the whole thing, no problem. Here's a quick summary: in high school I was a (small school) all-state sprinter with injury problems. These injuries led me becoming jaded on competition and I quit running after one year of college track. A few years later, after transferring schools, I joined the track team and got hurt again almost immediately. This time, however, I wanted to keep competing so I moved up in distance so I could still be apart of the team. I stopped eating meat in late 2005, and only this past summer stopped consuming all animal products for ethical reasons. Now that my time running track is over, I'm running purely for fun and I'm falling in love with trail running and the dream of completing a 100 mile race one day.] 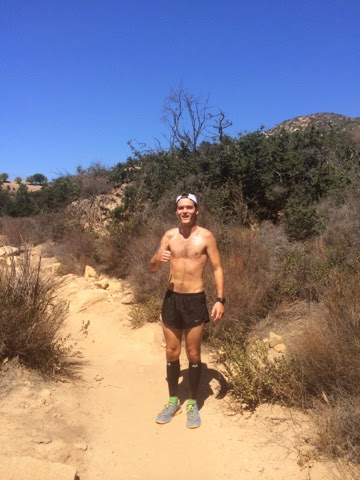 Growing up I had every intention of becoming a professional football player. I spent my Sundays watching my idol, "Prime Time" Deion Sanders.

I attended small, private schools through high school and wasn't able to play school sports until seventh grade. That year I played football and basketball, and I ran track. Looking back I can see that I was the most mediocre guy on the football field and basketball court, but I showed a bit of potential on the track. I was the only seventh grader to run on the 4x100m relay team-one that included an eventual state champion/record holder and another guy who was an eventual collegiate all-american.

This was great, because before I showed up to practice that spring, I didn't even know what track was. I did it because my dad was a runner in high school and he told me to do it too.

Eighth grade was when I had my first taste of real success. Coming off of a big turnaround football season and a championship basketball season, I was ready to go when track season arrived. I went on to win every race that I ran that year.

High school track began slow, but I eventually made the varsity relay teams by the end of my freshman year, and got early experience competing at the state meet, even if we did lean heavily on our all-state anchor leg.

From this time on, I was a track guy.

I tried football and basketball in high school, but I ended up breaking my collar bone playing football, and I was hardly good enough for freshman basketball as a sophomore. I should note that I got my big growth spurt early, and I contribute much of my success in middle school sports to this. By the time I was a sophomore in high school all of my peers had out grown me, and my advantage was gone. I'm about the same height now at 24 that I was when I was 13.

It was also around this time that I stopped eating meat. I'm not sure what got into my fifteen year old mind, but I had made the realization that eating chunks of dead animals was gross, unfair, and unnecessary.

There wasn't any sort of graphic PETA video or anything like that -- it just sort of happened.

I was given a lot of grief for this decision by my then track coach, but when I continued to improve they stopped giving me a hard time.

Eleventh and twelfth grade were focused on track, and when it was all said and done I had run in the state meet three of the four years, collected a box full of ribbons and medals, and earned a second place finish in the 4x100 meter relay in what I thought was my final race.

It wasn't until a month or so after I graduated that I decided to run in college. I was convinced by my high school coach from ninth and tenth grade to run on a team that wasn't much more than a club team. In fact, I believe that I held school records for the 100m, 200m, and the 4x100 meter relay. This isn't because I was fast; it was because I was the first to run these events in the existence of the program. (side note: this program has grown dramatically since then, and has seen much success)

The truth is, my junior year of high school was my strongest on the track, and the next two years were filled with injuries, PT appointments, and disappointment.

After just one year of college track, I decided to hang up my spikes for good and transfer to a community college without a track team to pursue academics and work. I was jaded and happy to be done with the living the life of an athlete.

Oddly enough, as jaded as I was on competition, something inside of me wanted to give coaching a shot. Timing was right for me, and I became the sprints coach at my high school at 19 years old. I made a ton of mistakes, learned a lot, had fun, and finished the season with a handful of all-state sprinters, and a state champion relay team.

I was hooked. I knew from that point that I would coach track forever.

It wasn't the success that the athletes were having, or the opportunity to create workouts that I loved; it was the daily interactions with the student-athletes. I got to be there for them, and walk through tough times with them. I coached another season of track, and I branched out to helping with cross country before I made my initial move to Santa Barbara.

I transferred to a small NAIA school with a historically successful track program. I had the itch to compete again after coaching for two seasons, so I got in touch with the coach and he said he'd give me a shot. I joined the team as sprinter because that's all I had known. I quickly re-injured my hamstring, and had to face the music: sprinting wasn't for me any longer. My coach, who I admire greatly, presented me with two options: move up in distance and keep competing, or quit because my body can't handle the explosive nature of the sprints.

I stayed on the team, made great memories with wonderful friends, and learned to love running. I ran two seasons of track and one season of cross country. My times and finishes wouldn't indicate that I was especially successful, but I gave it my best shot, and I picked up a lot of knowledge and wisdom along the way.

Having a few years of coaching under my belt at this time, I clung to what Coach shared with us. I saved all of the handouts he gave us, and I regularly steal ideas from him since I've returned to coaching.

This brings me to the summer of 2013, and I wrote about this time in more detail last month, but here's a quick summary: I was a new college graduate trying to figure things out, and I was running because I thought I was supposed to; it's the identity that I had built for myself. After months of wrestling with the question of why I was running I concluded, quite simply, that I was running because I can, it was fun, and because it gives me the joy of a little kid.

It's now September 2014, and two overlapping passions have led me to eating an entirely plant-based diet and running on trails rather than roads, with a dream of completing a 100 miler one day.

I've become almost obsessive over reading food labels and trying new things with my diet to optimize  my nutrition while giving up all animal products to do my small part in showing love to non-human animals and protecting the environment.

Trail running is a whole new adventure for me. I was a numbers based runner, and my numbers aren't as pretty any more. My miles are (significantly) slower, and I'm not running as far due to elevation gains and technical trails. This was hard to swallow at first, but I'm enjoying the opportunity to get out in nature and explore new trails more than I did running fast on the same roads over and over.

I'm learning a lot from trial and error: what kind of foods does my body like? What types of workouts can my body handle? When is it okay to walk while on a trail run? How much can I push this Achilles injury before it's unbearable?

My twelve years of running have taught me a lot, and, as with most disciplines, I've found that the more I learn, the more I realize I don't actually know.

I'm looking forward to the day when I can share the chapter of my story where I went from 100 meter runner to 100 mile runner.

Posted by Josh Christensen at 3:12 PM